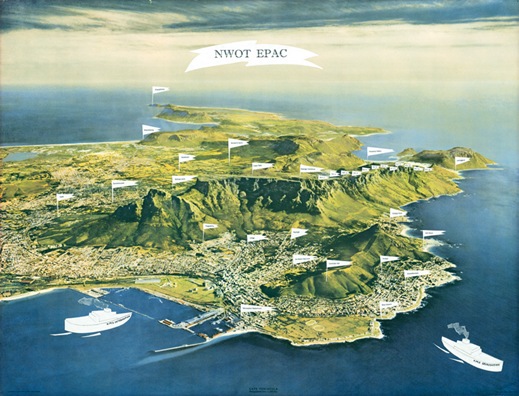 My eldest son, Noah, and I worked on this submission to a competition on visions of a future Cape Town.

Perhaps the image will still be too small for you to see what we have done to this familiar and rather old-fashioned view of the peninsula. The pennants flying identify the following places: Monwabisi Waterfront, Lavender Hill with the du Noon Day gun on its slopes, Lentegeur where once the hideousness that is Llandadno was and is. Brown’s Farm flies on the soil of Constantia, Nyanga, Langa and Gugulethu are cradled in the city bowl, the Cape Flats are to be found on the flat top of Table Mountain with Nyanga terminus which has taken over the cable car house at the one end. The 12 apostles are named N.Y1, N.Y.2 etc, in the imaginative style of our former township planners, while the Clifton bungalows which do in any case house some of our strugglistas, has been re-visioned as Joe Slovo. Khayelitsha is ‘doringone’ on the point, and grassy Camps Bay is Grassy Park. You get the idea, but to make sure the message is as clear as the weather on the particular day this shot was taken, a ship named H.M.S Segregation is heading out to sea while the H.M.S. Integration is pulling into port.

Nwot Epac ( or in slang, Naughty Plek) is my city.

This entry was posted in inversion, issues. Bookmark the permalink.