To order books contact your local bookshop or the publisher listed

Photograph of Charlie Mogotsi  by Jimi Mathews, Tribute,  August 1991
My first published work, illustrated by Niki Daly, appeared both locally (Shuter and Shooter) and overseas (Walker Books in the UK and MG Publishers in Germany). It tells the story of the Mogotsi family who lived in a shelter they had erected in someone’s backyard in Guguletu.  As Charlie plays in a muddy furrow, he mimics the construction of the shelter but adds features of his own to create a fantasy clay home.

A novel for the older teenager or adults, this is an unsentimental  telling  of a real story set in the 60’s in which the parents of the 13 year old narrator,  Steven,  are jailed for political reasons. He and his older sister muddle along as best as they can from one situation to another. Meanwhile, Steven grows into his own, emerging as a young adult with unique insights into what has happened to his family and why.

A short story, commissioned by Sandra Dodson and Rosamund Haden, the editors of
Just Keep Breathing, South African birth stories. The only work I have had published specifically for adults, the story is a montage of loosely linked images, reminiscences and  conversations  around my birth, the birth of my boys and birth in general.

Stars on the Dunes

A story that was published as a reader, this book attests to my passion for children’s literature about South African plants to rival the rich tradition of animal tales. How did  these low growing succulents with showy flowers land up on our shores? My story, which involves gossiping stars and an adventure through space, was inspired by observing how the dried seed heads of the vygie open into stars when dropped into a glass of water. 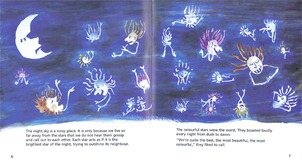 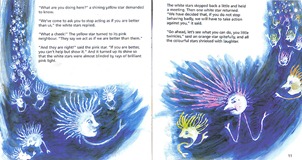 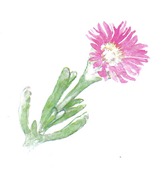 The Jam Tin and the Teacup

Watercolours accompany a minimalist text which is a conversation between an ardent jam tin orang-utan and a snooty, green-haired porcelain teacup. Using word play and rhyme, the two characters engage in a brief courtship ritual which leaves the one party rejected and all the wiser for it. 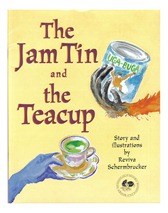 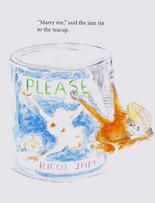 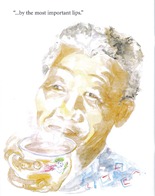 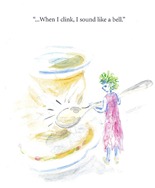 What do I see that flies?

The barest of texts supports the colourful, detailed and whacky illustrations in this early reader about the five senses: sight, hearing, smell, taste and touch. Each sense is milked for all it is worth with contrasts and surprises. A mouse booms, a rose stinks, an ice cream burns and a family flies. 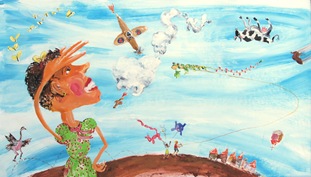 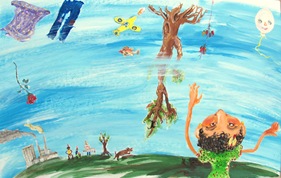 The World in There

Pinching one’s nose tight to open a dustbin doesn’t seem like the most inviting entry into a children’s book, but  in this reader with richly detailed illustrations and a rhyming text, the things Lele sees would tickle anyone’s fancy. A pencil speaks on the phone, chicken bones knit a gown, a carrot rides on an ox. A variety of goggas, spiders and a resident rat add to the atmosphere of creepy fun. 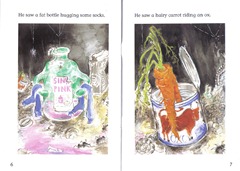 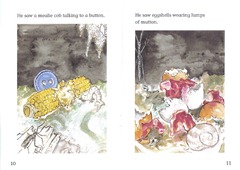 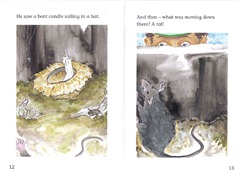 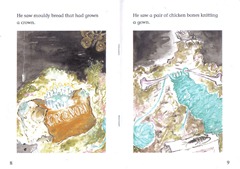 Taste and Eggs and Windows

Texts for photographic readers have become something of a speciality of mine.  With the advent of digital photography, the possibility of doing my own photographs became a reality.  I took photographs for a number of books in the Rainbow Reading Series, some written by me and some not, some non-fiction and one poetry anthology.

Eight books written, photographed and designed by the author that chronicle the lives of children living in South Africa and its neighbours – Namibia, Botswana, Zimbabwe, Mozambique, Swaziland and Lesotho. The books are totally authentic and depict the varied lifestyles, cultures and environments of children who are definitely part of the C21. 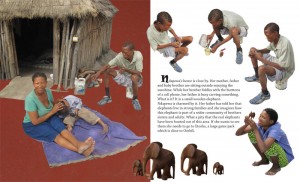 My most ambitious production to date, this picture book is an advent calendar of sorts depicting the adventures of Aunty Apples as she putters on her red scooter through the South African landscape of bush and dorp. Whilst on her travels she is busy recording all she sees and experiences in embroidered panels, a gift for her family who await her     return in Johannesburg.  In an echo of her journey but at a much slower pace, I spent  two and a half years embroidering the illustrations for this book by hand.  Stellar reproduction has accurately recreated the textures of cloth and thread on each page.

Completed at last, a new embroidered book that is a playful exploration of that lovely bit of South African nonsense we like to say when it’s raining and the sun is still shining. From ants to giraffes, wild dogs to guinea fowl, animals, children – and everything in between – congregate under the trees at the edge of the city of Johannesburg to celebrate a most unusual wedding. The embroidered and appliqued panels of this book took 5 years to complete and are rich with the kind of whacky details that children (and adults) will enjoy poring over. 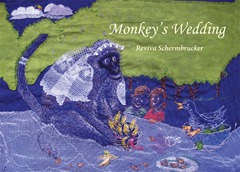 At School, what if…?

From the Mielie Book series, a story about Ncebekazi who has the normal anxieties of a child about to enter ‘big’ school: Will the teacher shout? Will she find the toilet? But Ncebekazi has the added concerns of a child with physical disabilities: Will there be many stairs to cope with? Will children laugh at her? Her mother’s emotional support and her own imaginative solutions help Ncebekazi make the big step with confidence.

Selected for the International Digital Library, 2005

Am I a Lion that eats People?

A Mielie Book that tackles the hugely topical but difficult subject of HIV/Aids in a unique way. Words, painted photographs and paintings combine to tell the story of Mawabo and his mother who are HIV positive. The metaphor of the lion functions at the same time as a symbol of the medical condition itself, the stigma they suffer and their courage in leading positive, healthy lives. By painting over the photographs of mother and son, their identity is concealed because it is their right to reveal or not to reveal their status as they wish.

Selected for the International Digital Library, 2005

This Miele Book tackles stereotyping and prejudice without a heavy handed sermon but with humour and punch. The main character discovers that other people’s opinions are often flawed and that his opinions need to be based upon his own experiences. Old people are not boring, dentists are not always men, yoga is not weird and when people talk about aliens they are not people from other planets!

“I am nobody’s doll,” are the exact words that Nolubabalo said to me when I interviewed her at her home. Nolu, like her only sister, is an albino, and when she hears the odd derogatory comment from others such as ‘umlungu’,’pink- skinned doll’ or ‘ghost’, it makes her really cross. Albinism is merely a skin condition and Nolu’s life experiences, feelings and dreams are like those of everybody else her age.

Available in English and Afrikaans

Experimenting with the traditional format of books is always fun. The ubiquitous matchbox is at heart of this  unique reading experience. A large matchbox slides open to reveal six standard matchboxes nestled within, and concertinaed inside each of those is a strip of illustration with text in isiXhosa, English, South Sotho and Afrikaans. The miniature scale and charming presentation appeals to children (and the child in all of us!).

Giving traditional children’s games a visual and multi-cultural update, these card games with photographic illustrations stretch a child’s understanding of family and of differences and similarities. You say “snap!” when two different children are wearing the same hat and the families you collect are no mere Mister, Missus, Master and Miss, but real families such as the S.O.S. Village family and the Sokwane family who number ten.

To order books contact your local bookshop or the publisher listed