The post below is illustrated with 2 paintings that are currently listed on my website under the heading Paintings and will be on exhibition at 6 Spin Street, Cape Town, for the month of October. The opening is on 5 October at 6pm.

This poem is about all of the paintings, brewed up over hundreds of sleepless nights, that never got to be but stayed in the realm of the great undone, the painting drought of many years that has thankfully ended. (Finally, victory over velleity!) 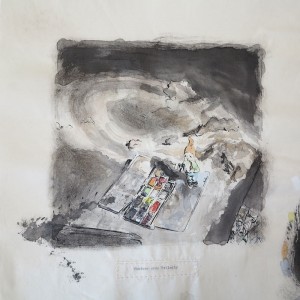 Velleity: merely wishing or desiring without any effort or advance towards realisation

There was still a need however, even now, to give a passing nod to those somnifugous  apparitions which were my teasing companions from my early twenties after art school had killed the love, confidence or power to paint ‘in daylight’. 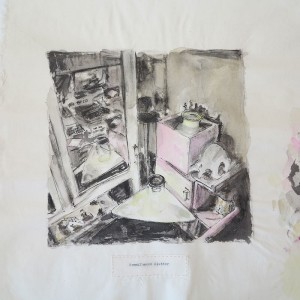 That it translated into a poem with the same title as my up-and-coming exhibition is a bit of a paradox but what I do know is that the paintings I dreamed up in my head for all those years are not anything like the ones I am now making.

It is only retrospectively that I see connections in the current flood of real works to the themes of my soul, if I can put it that way. People forget that as an artist one is also a spectator, watching and observing the work as it unfolds, often surprising oneself, challenging old and outworn opinions that are carried about like heavy luggage – the work we think we should make – and lighting up new and unexpected paths, right there, in front of  our noses, under our brushes.

The bigger ‘soul themes’ as I call them have not disappeared, though. Every now and then, comes a moment of recognition, old familiar friends in a new guise : “Ah, so here it is, this thing that has haunted me forever!”

But I have stayed from the point. This particular poem entitled ‘Noospheric Nights’ attempts to capture ghost-painting of the mind – frenetic, insistent, immensely engaging for the dreamer but ultimately sterile.

Noosphere:  The third phase of evolutionary development of the Earth following the geosphere (inanimate matter) and biosphere (biological life). Noosphere refers to human consciousness and thought.

No blood-spotted sheet to
display at dawn
The stacked canvasses, the piling of paper
unabated, all blank

Colours, strokes, scratchings
muted. And mutated
for every decade or two
they reappear like old friends at the door

By this
I now pronounce this exhibition open

This entry was posted in Art commentary, Autobiography. Bookmark the permalink.