In 1989 my first published picture book, “Charlie’s House”, was released. The story of how it came to be and threw me into the trajectory that I have subsequently taken is worth repeating.( Apologies to all of you who have heard it many times.)

I attended a two-session workshop run by Niki Daly at the Mowbray civic hall for people interested in writing or illustrating children’s books after meeting Niki and his wife, Jude, when our sons attended the same pre-school. We were asked to choose our area of interest and I remember not being sure whether to tick writing or illustrating, as I was, if you must know, uncertain about both. In my wake was a fine art degree which had left me with a frustrating artistic bent rather than solid illustration skills. Writing had always come easily to me and been pleasurable. I had kept numerous diaries when I was a child. Of late I had had a few articles published in local magazines, an attempt to generate some income after I left teaching to be with my young children. But that was the sum total of my writing experience.

I can’t recall what category I chose but I do remember coming away from the first session on an enormous high.

This was it. This was what I had been waiting for. This made sense.

Niki had set  some “homework” for us: Write about an incident in your childhood, pop it into an envelope and post it to me, he had said. I needed and still need no invitation to throw myself into the past and rummage in it for the child that was me. That nudnik of a girl lives a hair’s breadth behind my daily life waiting, demanding, screaming! to be heard.

The very night I got home from the workshop, I started. Three “prose poems” were the result: “Ali and the Yeoville Flats Gang”, “Christmas in Yeoville” and “My Father Told Me”. I am only a tiny bit ashamed that I shoved a sick baby with a very sore ear into my husband’s arms to burn these words onto paper. The next day I found my way to Niki’s neighbourhood, brought the car to a gliding stop outside his house and quietly opened the lid of the post box on his gate to make a surreptitious drop-off. I was embarrassed to be seen to be so keen as to have not trusted the postal service or at the very least delayed my response to a decent interval.

At the next workshop, Niki read the pieces out loud. It was a heady feeling. I worked hard at not feeling or looking feeling grand but when, after the workshop, Niki asked me if I had written any other stories that he might be interested in illustrating , I was so stunned, I could barely speak. I think I nodded and that nod was a lie. We made an arrangement for me to come over to his house with more stories. I had a couple of days to write up a storm. “Charlie’s House” was one of the stories that I brought to Niki. The book grew from that encounter.

And now something about the actual story of Charlie’s House. Christine Mogotsi came to work for us when I was still teaching and my eldest son, Noah was just under a year old. It was the beginning of a friendship that has endured well beyond the 12 years she was with us and left to work in the hotel industry as a cleaner. Her only son, Charlie Tankie Mogotsi, was a little younger than Noah and became a frequent visitor and playmate.

Christine was in dire straits when we first met. She was living with her mother and young son in a backyard shack on someone’s property . Her position was insecure and she had to move a number of times including a stint in an informal settlement where the unhygienic and unsafe conditions appalled her. At the time that I attended Niki’s workshop, we were fighting a determined battle on her behalf to find something half way decent for her and her small family . As I sat down to write stories for Niki, it was natural to plug into something that was currently playing out in our lives.

The picture book describes Christine’s predicament through Charlie’s play. Like all young children, Charlie shifts into an imaginative zone where mud and bits of scrap become the medium to merge what he understands of the adult world and his own aspirations and dreams.

After ‘Charlie’s House’ was published, Christine finally found and bought a house. She, Charlie and her mother lived in it until last year, when she sold it and went to live in Kimberley from where her family originated. The decision to leave a secure job in Cape Town was difficult but once again Christine showed her incredible determination to do what was right for her child.

Charlie – a delighful, wonderful child – had done fairly well at school until the the later part of high school when he started to use drugs. My children who had maintained – and still maintain – a relationship with him, were unaware of the extent of the problem but his mother had no illusions. Phone call after phone call from Christine related Charlie’s slide into a dark place. A stint at rehab and an intervention by a drug counsellor at his home did little to change matters. Charlie was demoralised. Without a matric under his belt and with no hope of meaningful work, he had lost the way forward, forcing Christine to come to the decision that the only way to save her son was to take him away from the environment which was poisoning him.

And miraculously, the move to Kimberley did just that. Charlie began to wash and take care of himself and his mother and granny. He got himself a job and as the only breadwinner, is supporting his family. He underwent a Tswana cleansing ceremony. He began to attend church and the latest news is that he has been promoted to a managerial position at the establishment where he works. We are so proud of Charlie, our hearts are busting.

The last pages of “Charlie’s House”, the book, read:
Charlie sits down to a meal of bread and soup with his mother and granny . He carefully bites two mouthfuls from the centre of his bread and places the slice on his nose. He dreams he is wearing sunglasses and driving his very own car past the house that he has just built. “Don’t play with your food. Eat up,” says his granny. But Charlie puts his foot down and keeps on going.

Keep your foot down and keep on going, Charlie.

On our way north we visited the Mogotsis in their “new’ house in Kimberley. 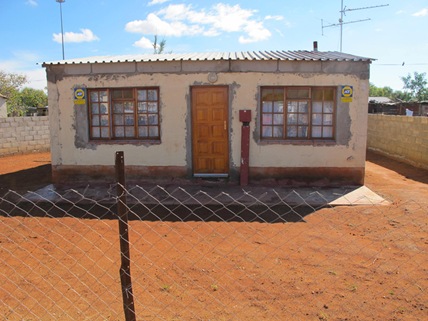 A new start in Kimberley 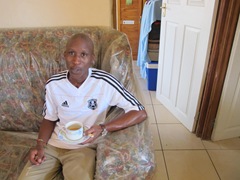 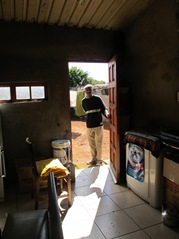 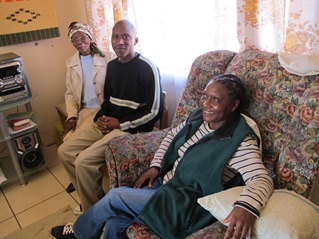 This entry was posted in Autobiography, Children's books. Bookmark the permalink.